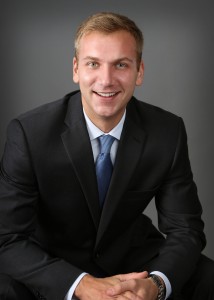 Ross is licensed to practice law in Minnesota and North Dakota and is a member of the American Bar Association, Minnesota Bar Association, and North Dakota Bar Association. At Tentinger Law Firm, P.A., Ross focuses his practice to personal injury and  business litigation. He handles personal injury cases involving wrongful death,  motor vehicle accidents, slip and fall injuries, among many others. He is an experienced litigator and trial attorney who aggressively fights for his clients. In his free time, Ross enjoys playing hockey, watching the Twins, and playing with his dog, Jax.

Car Crash – Our client was rear-ended on Highway 169 on her way home from work. She sustained significant spinal injuries that required years of medical care and eventually surgery. Her medical bills piled up during that time but when it was time for her own insurance company to help, they denied the claim and left her on her own, despite her being a loyal customer for over 20 years. Ross Tentinger and Attorney Isaac Tyroler took on the insurance company and went all the way to trial. A jury saw through the insurance company’s arguments and awarded our client a substantial verdict.

We had the opportunity to represent a young girl who was attacked by her neighbor’s Pitbull while playing in the backyard. The dog latched on to her wrist, breaking her arm, and leaving her with a laceration and life-long scars. Ross Tentinger took on her case against the dog owner and their insurer to make sure this deserving client was treated fairly and received a fair recovery.

Car Accident – A driver ran a red light and crashed into our client who was driving home from dinner with his wife. Our Client, at 85 years of age, sustained a fractured sternum, bruising his heart in the process. He required an extended hospital stay and a permanent pacemaker.  After securing the full limits from the at-fault driver, Tentinger Law Firm pursued our client’s own auto insurance company and obtained full policy limits through his own underinsured motorist coverage (UIM).

Slip and Fall – Client was entering a business when his foot caught on an unmarked rise in the concrete sidewalk directly in front of the main entrance. The result was a traumatic ankle injury to our client. Upon inspection, the sidewalk was found to be in disrepair and in violation of building codes, including the ADA.  We obtained a sizable settlement to reimburse him for all of his medical bills and compensate for his pain and suffering.

Dog Bite – Our client was a young boy who was spending time at the park with his family when he was attacked by a stranger’s dog. The attack left him with cuts and bruising on his body, and bite marks on his cheek. Ross Tentinger worked tirelessly to obtain a great settlement for this young man that will surely help him in his future.

Our clients were a young married couple and their two children whose house burned down and was a total loss. They filed the claim with their national known insurance company who took over 18 months to investigate before wrongfully denying the claim. During that time, the family was left waiting and wondering how they would be able to rebuild. Our firm went after the insurance company and tirelessly pursued them for their bad faith claims practices. Ultimately, the insurance company settled before trial for an amount significantly higher than the original fire loss claim itself.

Ross Tentinger represented a woman who was rear-ended on the interstate. She developed severe neck pain that did not respond well to conservative treatment. She eventually needed surgery to repair her neck. Ross Tentinger pursued the claim and refused to accept anything less than the full insurance policy limits from the driver at fault for the crash.

Motorcycle Accident – Our client was riding his Harley Davidson down the highway when a pickup truck driver pulled out in front of him. Not wanting to collide head-on with the side of the pickup, our client tried to steer around the pickup but his bike was just not made to handle high-speed turns and he ended up on the pavement, sustaining several broken ribs and serious road-rash.  Our firm obtained an excellent resolution to the claim, obtaining funds to cover all of our client’s medical bills and leaving a sizable portion for his pain and suffering.

Claim against HOA and Property Manager – Our client owns a townhome that’s part of an association. The association hired a property management company to manage the common property. That company attempted to force our client to pay more dues than owed. Ross Tentinger successfully tried the case and our client was awarded the full amount sought, including his attorney fees and expenses.

Slip and Fall – While exiting a fast food restaurant, our client fell on snow and ice that was allowed to accumulate immediately outside the door. Our client suffered a fractured wrist in the fall. Ross Tentinger pursued the restaurant for failing to keep the property safe and clear from snow and ice build-up.

Car Accident – Our clients were on their way to celebrate the wife’s birthday with friends at a local restaurant when they were hit by a driver running a red light. Both clients suffered broken ribs and various other injuries.  Our attorneys filed a lawsuit against the adverse driver and aggressively litigated the claim to resolution, obtaining a settlement that covered all of our client’s medical bills and provided for their own personal emotional and mental anguish.

Slip and Fall – Our elderly client was walking into the local country club to meet his grandson. As he approached the main entrance door, he tripped over an unmarked rise in the concrete and fell forward, hitting his head on the pavement. Our investigation revealed that the rise between the two concrete sections which caused the fall was known to the property owner and was also a violation of the Americans with Disability Act. Ross Tentinger of our firm aggressively pursued a lawsuit against the property owner and obtained a favorable settlement to cover the family’s medical bills as well as compensation for their pain.